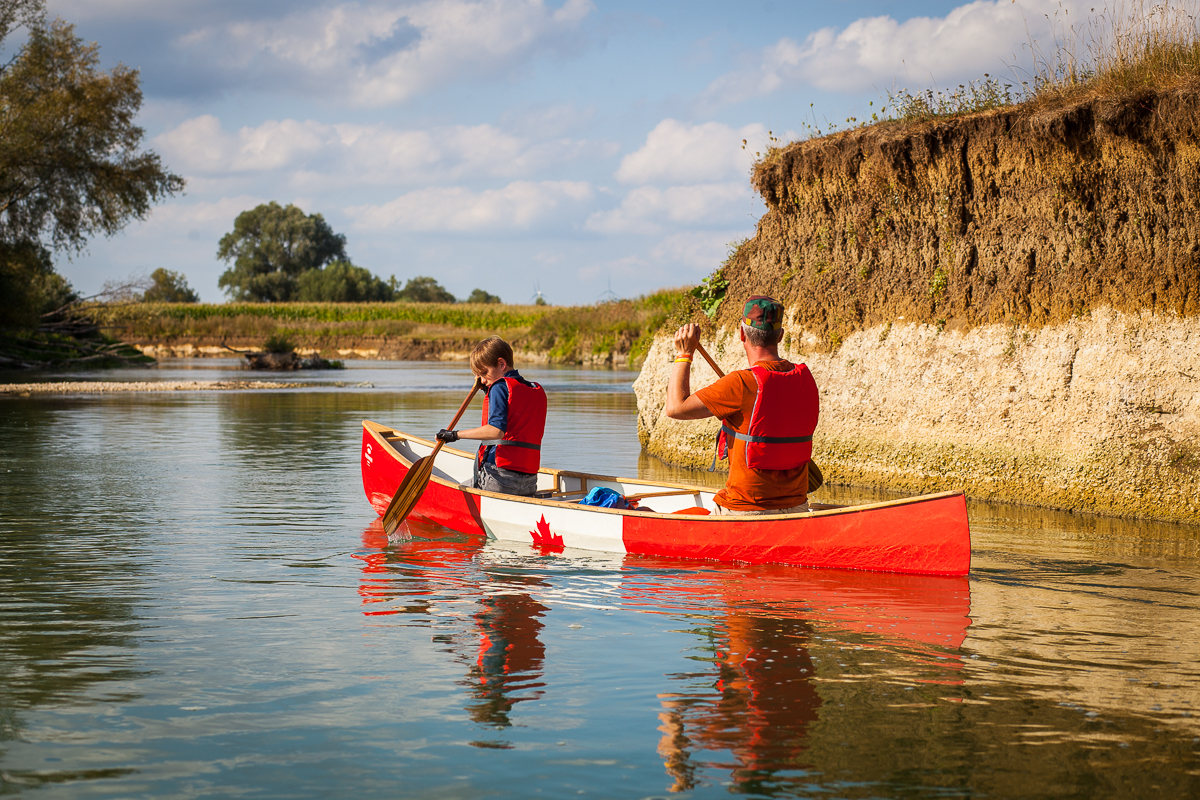 Canoeing on the Meuse

Canoeing on the Meuse? Does not sound fascinating, and yet. In the northern French département de la Meuse, the river is not yet the channeled river that it becomes from the Belgian city of Namur. On the contrary, it is a particularly beautiful and natural water course that flows through a very natural landscape. We paddled the Meuse from Verdun to Sedan. A trip of about 100 km.

The Meuse, the oldest river in the world

The Meuse is considered one of the oldest rivers in the world because it flows through the Ardennes massif which was formed during the Paleozoic era. This makes her at least 250 million years old. The villages and towns along the river are obviously not that old, but they breathe a lot of history. For the Romans the river was a transport route between Sedan and Maastricht and it formed the border between France and the Roman Empire during the Middle Ages. La Douce France is never far away in the towns you paddle along.

From Verdun to Sedan

Between Verdun and Dun-sur-Meuse, the Meuse meanders through a narrow valley with limestone soil. The river is fed by a number of short tributaries, causing small rapids here and there. The high banks are the home for kingfishers and sand martins.

Past Dun-sur-Meuse the valley widens and the river meanders with a very small decline through the plain of ​​Woëvre. In Stenay the Meuse runs through a narrow valley with high wooded banks.

The Meuse traverses the Ardennes from here. It continues to meander through a narrower valley. The center of Mouzon is an island, embraced by the Meuse. The river broadens again and runs through meadows with beautiful views. From Sedan, where we stopped, the Meuse continues its journey to the north.

Canoeing on the Meuse, practically.

The Meuse is a beautiful river to make a multi-day canoe trip. The river is class I everywhere or very limited class II. In other words, she is certainly also suitable for novice canoeists. Keep in mind that if you want to go canoeing on the Meuse you also have to portage regularly. The river is dammed and there are no facilities to transfer canoes. Sometimes it is a matter of struggling to get through the bushes but it is worthwhile.

Bivouacing is sleeping outside without built structure (hut) or semi-solid structure (tent). It consists of setting up a camp at sunset and breaking up and leaving at sunrise without leaving traces of stay. In concrete terms, sleeping under the open sky or under a tarp is allowed. Nobody will reprove you if you set up a small tent.

Bivouacing in France is generally tolerated in (natural) areas far from the civilized world (at least an hour’s walk from a first town or village at nightfall). Bivouacing is not authorized in military areas and protected natural areas (well marked on IGN maps). Bivouacing is often better tolerated if you are a few kilometers away from a campsite, a hotel or another accommodation at nightfall. To camp on private or state land, it is obviously necessary to ask permission from the owner.

Never make fire if the surrounding vegetation is dry or the ecosystem fragile. We use the stove at the least doubt. A fire for cooking is generally tolerated. Which means; a small fire to cook food and not a bonfire with flames of one meter high. In order to remain discreet, we always dig a hole for the bivouac. This reduces the height of the flames and therefore also the night lighting. In addition, the pit can easily be plugged in the morning so that you do not leave any traces.

This site uses Akismet to reduce spam. Learn how your comment data is processed.